Angela Oldroyd appointed to the board of directors for FEO 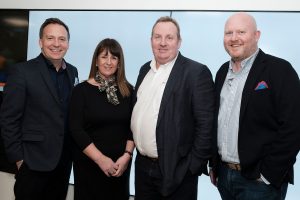 We are excited to confirm that our director, Angela Oldroyd has been appointed to the Board of Directors of For Entrepreneurs Only.

The FEO Board, representing a collective of 180 private sector businesses held its AGM at Hull’s KCOM Stadium, announcing a new five-year plan to help entrepreneurs start, adapt and grow their businesses.

As a Community Interest Company, For Entrepreneurs Only (FEO) is approaching its tenth anniversary, originally set up in 2010 when founder member David Kilburn from MKM Building Supplies invited a small gathering of business people to an over-dinner discussion, born out of concerns for the future of the local economy.

Recently the Board consulted with members on what could be done to manage the real challenges that businesses are facing now. This resulted in a plan taking FEO to 2025, which encourages, supports and mentors potential and practicing entrepreneurs on their path to success.

To help realise the plan, four new Directors have been appointed to the FEO Board, representing the diverse range of members and businesses.  These are Thomas Martin, Chairman of Arco Group, Lloyd Atkin, Managing Director of Bio-D, Angela Oldroyd, Director of The Promotion Company and Martin Lauer, Managing Director, The One Point.

“I feel very fortunate to have been appointed as a new Director of FEO. I myself have been a member since 2012, involved with a variety of projects along with other members. From the outset I have been part of the NxGen team, working in schools and colleges to inspire young people to become entrepreneurs. We aim to plant a seed that entrepreneurship is possible for all, despite gender, age or indeed academic achievement.

As FEO helps others to grow their businesses, it is important that FEO grows as an organisation also; in terms of the quality of our programmes and the service we offer.   FEO needs to adapt in the changing world surrounding it, and to be part of the leadership driving this, is a privilege and a pleasure.

Andrew Horncastle, Chair of FEO hosted the AGM. He said:

“In FEO we have created something truly special and I am pleased to see that over the last nine years we have developed a unique organisation which has an impact on the local economy. This makes me proud to be a member.”

“Over the last twelve months, through our unique programmes and events we recorded almost 7000 hours of volunteer time, which benefitted 2680 individuals. These include start-ups, entrepreneurs, school and college students and delegates who attended our events during The Business Day in June.”

“I believe FEO is really needed in this area. We have real challenges on our hands with low aspiration, low pay and worklessness. We have to compete against stronger economies who suck our talent and lay bigger claims to central government investment and intervention.”

“The key to it all is our economy and FEO’s big role in all this is to boost entrepreneurship and help entrepreneurs manage the risks they take in order to create better and higher paid jobs, putting more money in the pockets of local people to be spent locally.”

“As we enter the next chapter of FEO’s success story, the new Directors have been selected to support our objectives; to help entrepreneurs start-up, adapt their current business and above all grow to where they want to be.

“Thomas plays a major role as Chair of NxGen, the group working with schools, colleges and The University. He is also a mentor, giving his time to help other entrepreneurs benefit from his experience. Angela leads NxGen events and is key in the development of this particular programme and representing FEO in the wider community. Martin delivers our premier programme, Step Change for Growth which helps ambitious entrepreneurs ‘let go to grow’ and Lloyd is one of the founders of 360 and 360+, helping SME business owners adapt and flourish.”

“All FEO members give their time to support our programmes and events. Through a peer support environment, entrepreneurs really thrive and, as part of the membership, local entrepreneurs can learn so much from spending time with like-minded business owners. This is a major benefit of being a part of FEO.”

To find out more about FEO and the membership, visit here.