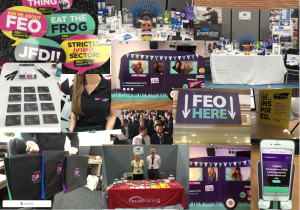 Excitement was building for Humber Business Week, when the region was preparing for the numerous events, lunches, dinners and workshops held at many top venues. The Promotion Company was working with exhibitor’s weeks in advance, sourcing branded products and clothing, whilst also taking part in events throughout the week.

The week began with the Bondholders’ Breakfast held at the impressive, newly refurbished Middleton Hall at The University of Hull, where Alan Johnson MP presented to the assembled audience alongside other interesting parties. We were given branded badges upon arrival.

Next Angela Oldroyd, Director of The Promotion Company was on her way to the Institute of Directors’ luncheon with Midge Ure; a fascinating take on his business, music, and of course the recording of the charity hit,’ Do they know it’s Christmas’ and Band Aid. This event was held at the KCOM Stadium, fitting to find a great gift on the table from KCOM of a Key ring with a cream telephone box, which can only be found in the Hull area, a recognised ‘difference’ to the rest of the UK’s red telephone boxes. A big thank you to The One Point for their kind invitation to this event.

So then back to work, checking all was organised for exhibiting The Promotion Company at the Hull & Humber Chamber of Commerce Expo at Costello Sports Centre in Hull, where 85 organisations gathered to promote their products and services. Not only did The Promotion Company have their own stand to arrange but also the stands of fellow exhibitors (clients) who had ordered products from them. Two days of exhibiting, meeting new contacts, loyal clients and other exhibitors. The Promotion Company gave away branded sports bottles, soft touch pens with stylish note books to match.

The Promotion Company had a few orders running for Bridlington Spa and For Entrepreneurs Only (FEO) for The Business Day which took place at The Spa on Friday. They ordered delegate bags and the rather perfect matching combi-sets, not only providing something useful but also presenting the Spa’s branding in all its glory. FEO ordered a life-size caravan cut out as a welcome station for 650 delegates including more than 100 of their members and guests. The Promotion Company supplied this caravan, which not only drew the attention of the crowds but also acted as a photo/video booth for the delegates. All the large format display items were created for FEO, to ensure their branding remained strong amongst other sponsors and to locate the FEO presentations. We also provided foam backed badges which were walking adverts throughout the day. Lastly a general product was produced, the Brite dock phone holders, which simply promoted the FEO brand, this was event focused (a deck chair shape) but also functional for the recipients.

In conclusion in what was an incredibly busy week, not only supplying to clients but attending and helping with the promotion of these events, it is hoped that The Promotion Company made a valuable contribution to this wonderful inspiring week, alongside many others, so a big a thank you to Business Week 2017.