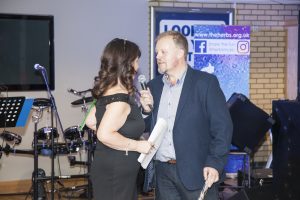 A charity fundraising evening raised over £6,200 in aid of When you Wish Upon a Star, the charity which grants wishes for children living with life threatening illness. The Promotion Company, based in Hull organised their second event for the charity. Having raised a total of £10,000.

Over 150 guests attended David Lloyd Gym and enjoyed a #LoveHull themed event which included a game of Mr and Mrs, an auction, raffle and musical entertainment from tribute band, The Herbs.

“We are delighted with the money raised at our event. It’s hard work, very time intensive but we had a fantastic evening and everyone was happy, including the charity.”

“Some children supported by the charity make wishes to be a fairy princess or soldier for the day, meet celebrities or sporting heroes that range from the Red Arrows to Mary Berry and others wish for a laptop to keep in contact with their friends and family whilst in hospital.

I went along with the families who took part in a magical trip, dubbed the Northern Santa Express. “The train whisks seriously ill youngsters away from hospitals and appointments to spend fun time with their families, giving them a chance to escape, even for a short while, from the difficulties they face on a day-to-day basis. It is such a privilege to be involved with When you Wish upon a Star and the amazing children it helps.”

Gary Payne, is the Volunteer Auctioneer, Event MC and helper for When you Wish upon a Star. He says:

“As a charity, we rely heavily on the generosity of local people and businesses to help fund our project. We are absolutely delighted to receive such a fantastic level of support from The Promotion Company, I know how hard Angela, Richard and their team have worked over the last few months to bring the event together. Also a number of their contacts have been very generous providing high value auction and raffle items.”

“The Promotion Company always pull off a great evening of entertainment and all the guests, including me had a ball.”

For further information about The Promotion Company, and When You Wish, visit www.thepromotioncompany.co.uk and www.whenyouwishuponastar.org.uk